You are here: Home / Kids Activities / Choo Choo Train Button Snake
Sharing is caring!
I’ve been intending to make a button snake play for my son since quite some time ago. I need to get him learn how to put on button shirt by him self. But every time I wanted to start making it, I always wondered, will he be interested to play with it? It’s such a simple play for a 4-year old kid.
So to get him enticed by this buttoning practice, I tried to make a bit more complicated thing. And creates a choo choo train button snake! Tadaa..

The idea here is to create a long chain of trains, consisting the locomotive and the freight cars. But instead of connecting one to another with magnet ( as in the case for wooden train play set such as this

), we connect them using a buttoned-end ribbon.
To make this, you need various color of felt, ribbon, and two buttons.
Let’s take a look how a 4-year old boy assembling the train. Initially he had some difficulty weaving in the button through the holes. But after several trials, he’s getting expert in doing it.

He had some imaginative play going on in his mind, pink car carries the pig, yellow carries corn, and so on. And he decided that pigs should be at the back end of the train, not next to the locomotive (don’t ask me why, haha, but I was amused on how much thought he put in before assembling the train).
The train shape added an extra level of difficulty, and hence more challenging. This is because he need to watch the direction where he should insert the button from. Otherwise, the wheels can be upside down, or the cars can get ‘folded’ if he inserted the button wrongly. 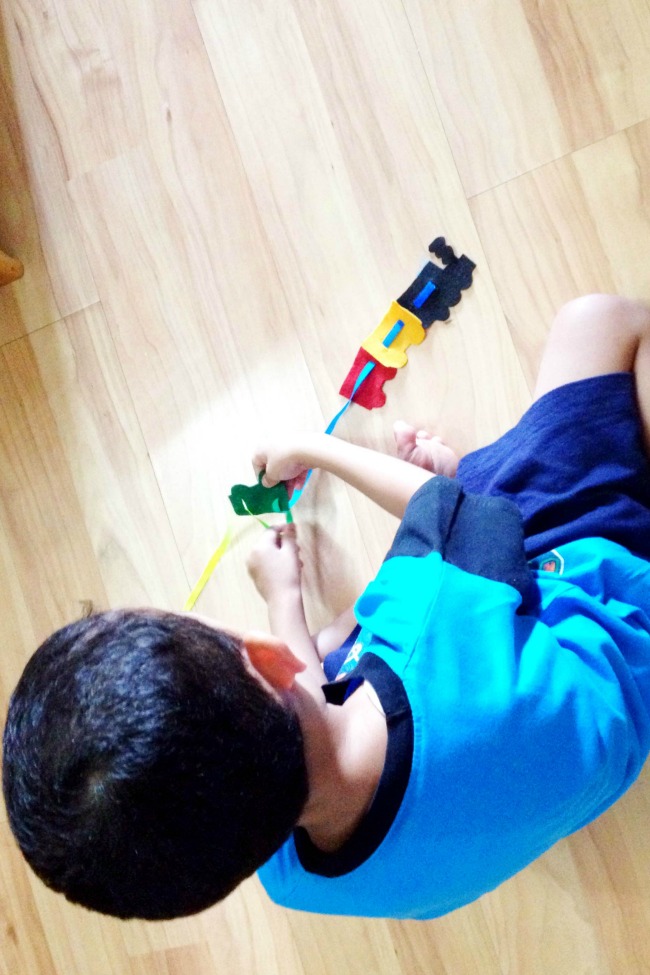 Figuring out how to insert the ribbon properly

I think we can even add more challenges to this train button snake, such as putting numbers on the cars, such that he learn number sequences. Or perhaps, follow a certain pattern like ABAB pattern (for this, you need to create the freight cars from two colors of felt only).
There you go, a choo choo train button snake, have fun!

Have you tried making a button snake play for your children? What is their favorite part of playing with it?
Btw, most of the materials used here were bought from Daiso. If you are looking for more craft inspiration using Daiso products, head off to MadPsychMum website, where she features 22 crafts made by Singapore mom bloggers from Daiso items. I especially loves the DIY rainbow blocks, the fishing game, continent map, cute personalized magnets, and the awesome iPhone cover!
For more fine-motor play idea, take a look on: 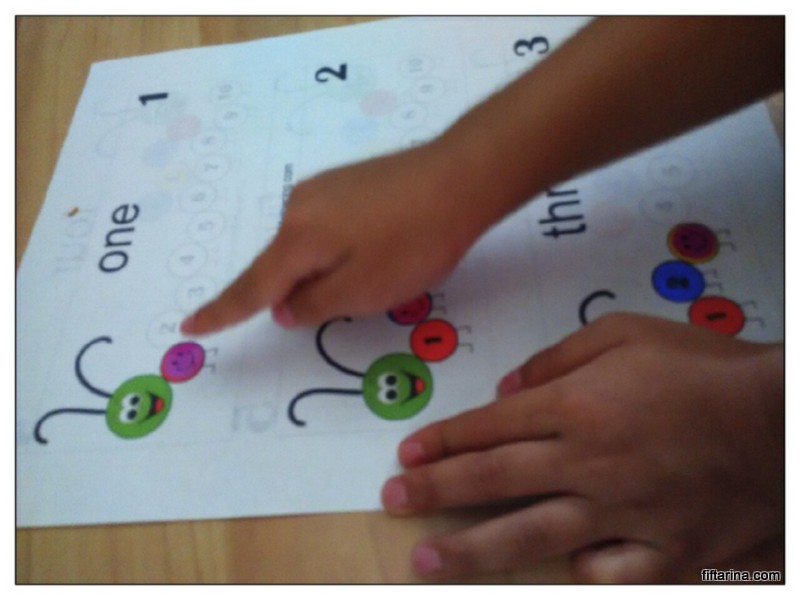 *Disclaimer: This post may contain affiliate links to products we personally use